Mobile World Capital Barcelona (formerly Mobile World Congress) MWC 2019 took place from 24-28 February. Over 109,000 visitors attended the event including almost 8,000 CEOs. Theme of this year event was “Intelligent Connectivity” with the main spotlight on 5G. During the four days of event MWC2019 the conference showcased many of the hottest mobile trends, particularly 5G, IoT, Artificial Intelligence and Mixed Reality.

Regarding technology advancements presented at the event, Qualcomm showed dominance and proved to be the absolute enabler of 5G technologies. Qualcomm presented Snapdragon 855 the first 5G mobile processor for 5G user devices that will appear in most major 5G phones (Samsung, Nokia, Oppo, Xiaomi, Vivo, HTC, ZTE, OnePlus, etc.). Furthermore, Qualcomm presented series of devices compatible to Release 16, though Release 16 is the second phase of 5G and should be announced in December 2019. Intel is the major competitor to Qualcomm with technology lag behind. Intel is planning to present XMM860 5G modem in the second half of 2019. 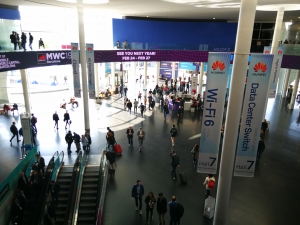 Samsung presented their first 5G phone “Galaxy 10” during the even build-up, as well as first foldable phone “Galaxy Fold”. Samsung’s Galaxy 10 that will be available in the US market will have Qualcomm Snapdragon 855 chip, while version available in Europe will have Samsung’s chip. Samsung will also launch RF chipsets for 5G base stations.

Xiaomi revealed Mi Mix 3, first 5G smartphone by Xiaomi. They began production of Xiaomi MIX 3 5G prototype in August 2018. The Mi Mix 3 uses a Snapdragon x50 5G modem and is powered by a Snapdragon 855 processor. Interestingly, Xiaomi had several activities related to 5G testing such as testing 5G NR Sub 5GHz signal and data connection in September 2018 and in October 2018 testing of 5G mmWave signal and data connection as well as speed.

LG presented new series V50ThinQ which is 5G-capable. LG V50 smartphone is a dual screen where user can stretch a single app across the entire space.

Infinera and KT telecom agreed on cooperation related to establishment of transport network. The idea behind this cooperation is to combine advantages and disadvantages of both companies in fibre technologies. They aim to be the leader in this technology. On the MWC2019, KT also signed MoU with Nokia to cooperate on 5G technologies.

Other telecom operators are also ready for 5G. SK Telecom, NTT Docomo, China Telecom, Vodafone, Deutsche Telekom and Turkcell presented new applications and services that are going to be available after establishment and wide adoption of 5G network. Deutsche Telekom announced a partnership with Niantic and Mobile edge X and launched new version of SIM card, called eSIM. eSIM enables SIM provisioning of any mobile device. It is interesting to note that telecom operators have shifted from a set of standard services they offer, so they have begun to make complete solutions from the chip to the service level. Also, Vodafone now claims that they are no longer a telecom but a technology company. China Telecom is one of the operators’ bearers that follows this trend.

New Wi-Fi technology, Wi-Fi 6 was presented at MWC2019. Wi- Fi 6 is a next generation of Wi-Fi based on IEEE 802.11ax specification closely related to 5G (share some technical foundation). Device makers rolled out mobile devices supporting Wi-Fi 6 technology. Cisco has teamed up with Samsung to develop products and solutions for Wi-Fi 6. For example, Galaxy 10 is equipped with Wi-Fi 6 and works perfectly with Cisco’s AP. Intel also delivered a first Wi-Fi 6 live demo at the MWC2019. However, US regulator FCC still needs to allow 6GHz spectrum for this new technology. QUALCOMM announced WCN3998 chipset with support Wi-Fi 6 key feature as well as full-feature Wi-Fi 6 mobile SoC ready for standard certification by the end of this year.

Another event running in parallel with MWC is a Four Years From Now (4YFN). Winner of the 4YFN is NanoLock Security.

We use cookies to ensure that we give you the best experience on our website. If you continue to use this site we will assume that you are happy with it.AcceptRejectPrivacy policy
Revoke cookies
<!-- End GoogleAnalytics —>